An Assessment of the U.S. Job Market in Commercial Real Estate

The jury is still out on commercial real estate employment prospects for 2012. During the first three quarters of 2012, the Cornell/SelectLeaders Job Barometer found that the commercial real estate job market showed steady improvement through the end of the third quarter with job postings up 32% over 2011. This movement reflects the optimism being felt not only in the commercial real estate markets but the overall US economy, and yet uncertainty over Europe’s debt crisis, uncertainties with the fiscal cliff in U.S and the complexities of tighter financial regulations across the world present caution.

“Job Barometer findings on increased commercial real estate job opportunities reinforces the emerging optimism that many in the industry have felt during 2012,” said David Funk, director of the Baker Program in Real Estate at Cornell University, adding “but as we move into the traditionally slow Q4 hiring season it will be interesting to see if there will be a significant pull back in hiring.”

As U.S. unemployment has slowly declined over the last year, job postings on Select Leaders have increased significantly. This trend is reflective of the improvement in overall market sentiment. Improvement in market sentiment is largely due to improvement in the housing industry. For example, according to the Commerce Department applications for building permits, a good sign of future construction, jumped nearly 12 percent to an annual rate of 894,000, also the highest since July 2008. Improvement in real estate markets has spurred hiring as firms have had to increase staff to align with market conditions. The chart below highlights the inverse relationship between Commercial Real Estate Job Postings and US Unemployment. 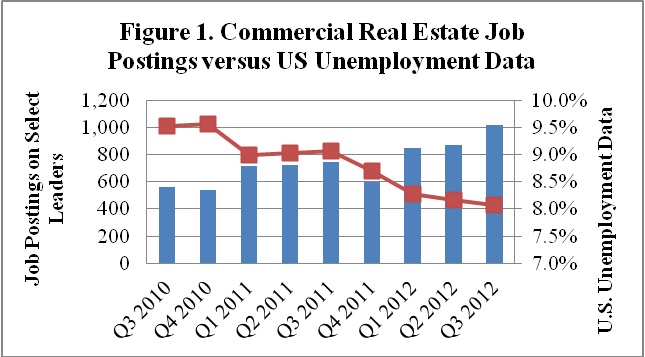 Job opportunities in the Retail and Multi-Family sectors grew 22% and 15% in 2012, respectively. An interesting insight comes from comparing the 2012 job postings by Sector to the 2011 and 2010 job postings by Sector (see Figure 2). Signs of recovery in 2012 drove minimal growth in the Retail, Single Family and Office Sectors. It is still too early to classify the uptick in postings in these sectors as a trend, but the growth throughout the first three quarters in 2012 is a positive sign. It is interesting to note the significant uptick in the Single-Family sector in 2012. The sector accounted for 4.77% of jobs in 2012 compared to 1.57% in 2011. The increase in single-family job postings corresponds to the increase in the S&P/Case-Shiller Home Price Index. The 10-and 20-City Composites recorded annual returns of +1.3% and +2.0% in August 2012. As housing values have increased, investment firms have begun hiring staff to assist in acquisitions, asset management and property management. Similarly, there has been a trend amongst investment management firms to capture yield in a potential housing recovery by pursuing a REO to rental strategy. (For an understanding of the commercial real estate employment categories, including sectors and job functions, visit the Cornell Real Estate/SelectLeaders Employment Matrix at www.realestate.cornell.edu/) 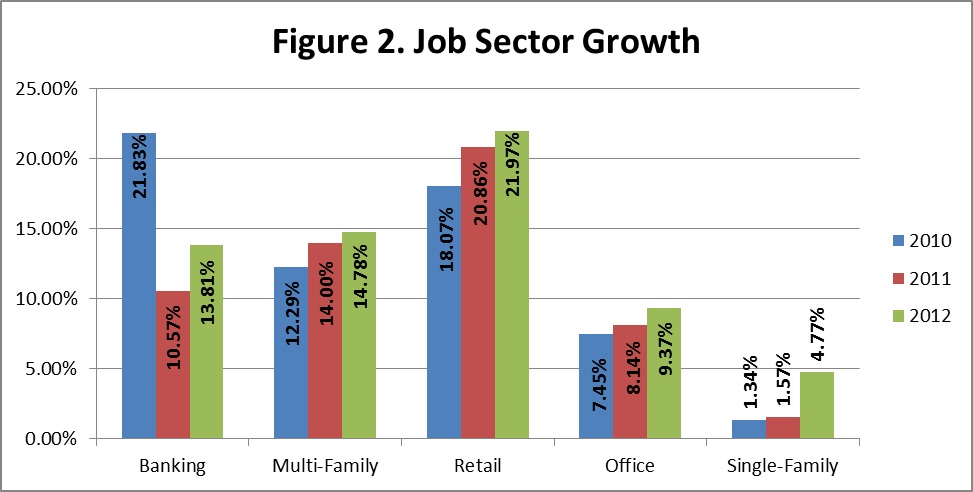 The previous sections address how the Job Sector have been affected so far in 2012, but to complete the analysis one must understand how the day to day operations are changing within the real estate sector. The Cornell/SelectLeaders data uniquely reveals how the fundamental job duties that make up a substantial portion of the employment positions have changed in recent years.

Real Estate Employment Matrix identifies a total of 40 Job functions, and the top three Job Functions, in terms of job postings in the first three quarters of 2012, were Asset Management/ Portfolio Management, Property Management, and Accounting/Control. These three functions accounted for 30% of the total job functions posted in 2012. The Job Barometer finds that employers have a continued focus on driving operating income which has led to an increase in property, portfolio, and asset management jobs. Interesting to note that Acquisitions/Dispositions increased slightly during 2012, which could be a positive sign for the overall economy. Conversely, Brokerage/Sales and Leasing decreased which could reflect the uncertainty in the market place. 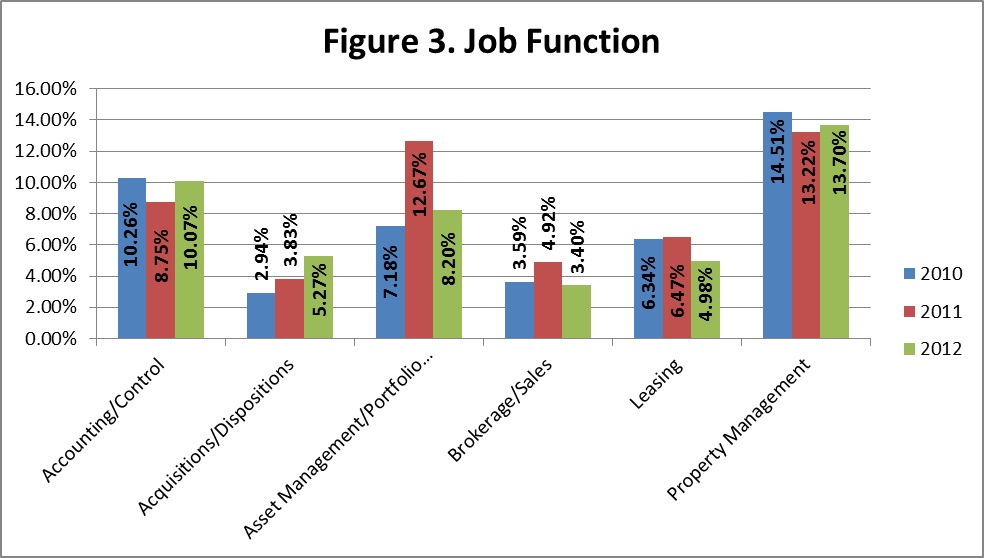 The table below illustrates the applications by state submitted on Select Leaders. Through the first three quarters in 2012, Select Leaders received approximately 102K applications. Approximately 43% of the applications were received from New York and California. 2012 was the first year in the last four years that Texas fell out of the top four states. This is not surprising as the Dallas Federal Reserve indicated a slowdown in its Summer 2012 report. 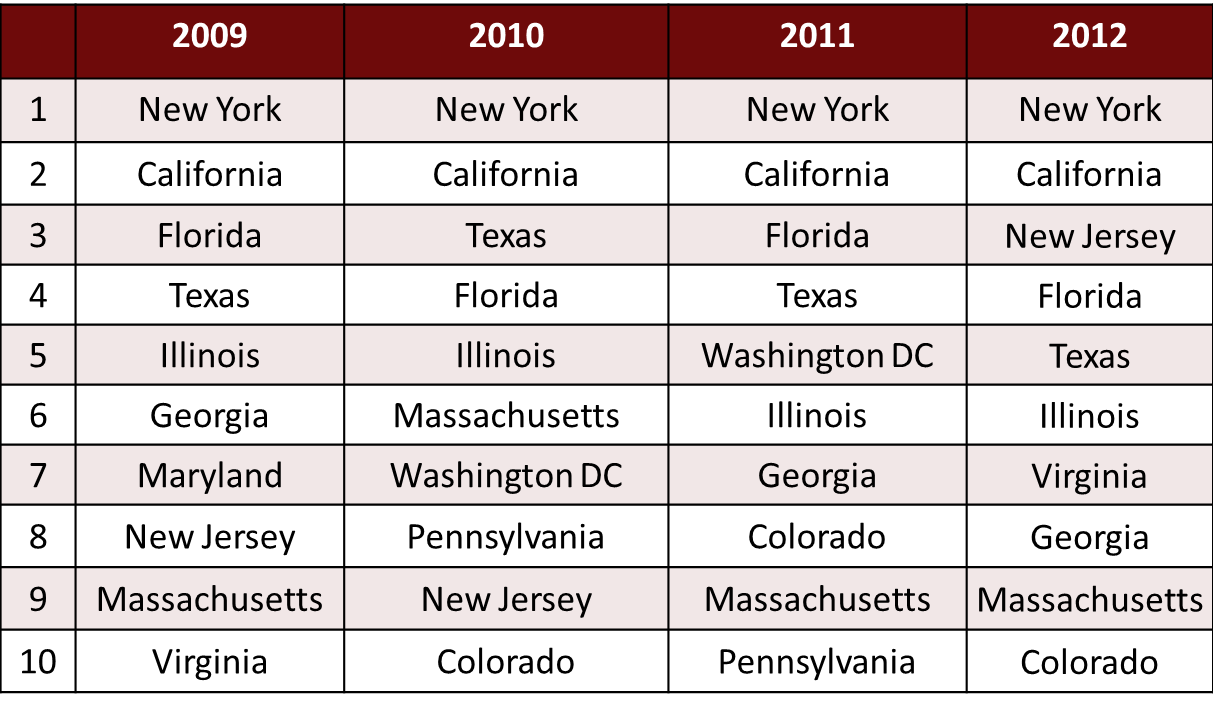 Cornell/SelectLeaders Job Barometer found that the commercial real estate job market showed steady improvement with job postings up 32% over the 2011 through the end of the third quarter. The fate of the fourth quarter commercial real estate employment will be dependent on policy resolution in Washington DC and overall market sentiment. According to SelectLeaders CEO, Susan Phillips, “In 2011 and going into 2012, job postings followed the stock markets, with ups and downs correlating with what was happening in Europe, or world-wide politics and economics. However going into the second quarter, American business apparently stopped listening, or at least reacting, and charted its own course upward. We can only hope that our industry and American business in general will continue to take the lead in 2013.”

The Cornell/SelectLeaders Commercial Real Estate Industry Employment Matrix was developed for the Job Barometer as a comprehensive model for organizing jobs within the industry. Organizing jobs within a three-part matrix by sector, business field, and job function not only provides a structure for understanding employment, but also serves as a model for understanding the structure, activity and roles within the commercial real estate industry as a whole.

Job functions truly capture the specificity and diversity of activities and jobs within the industry: A total of 40 distinct commercial real estate job functions are identified. The job function reflects the fundamental job duties that make up a substantial portion of the employment position.

The Cornell/ SelectLeaders Commercial Real Estate Industry Employment Matrix thus provides a structure for understanding activity in the industry and establishes a model for appropriately coding and organizing jobs within the industry.